The depth of penetration of UV light into human body tissue is low, therefore biological effects are mainly confined to the unprotected skin and eyes. Systemic effects may also occur. The biological effects can be broadly divided into acute effects which are rapidly occurring and chronic effects which occur as a result of prolonged and repeated exposures over a long time.

It is well established and generally agreed, that low-level exposure to certain wavelengths of UV light provides some health benefits, for example, synthesis of vitamin D3, which improves the body’s absorption of calcium, particularly into the bones.

On the other hand, overexposure to UV light can cause adverse health effects, such as erythema, photo conjunctivitis and photokeratitis in the short term (acute effects) and can be attributed to premature skin ageing, skin cancer and cataracts as a result of repeated exposure in the long term (chronic effects).

The key is to avoid overexposure.

Acute adverse effects of exposure to UV light are often painful, which should provide sufficient deterrent against overexposure in the future and rarely result in long term damage. Chronic effects of repeated exposure can be considerably more serious, but may not become apparent for many years.

It must also be appreciated that most of the conditions produced by overexposure to UV light may have other causes. For example, erythema is efficiently produced by infrared light and conjunctivitis and keratitis by infection.

It is interesting to note that UV light emissions produced by artificial sources will have exactly the same effect as their equivalent occurring naturally from sunlight. This is not the case with chemical therapeutics, which often have different effects when produced by nature and artificially.

The biological effects of UV light exposure depend mainly on the following:

These factors combine to produce ‘action spectra’ which provide the UV light radiant exposure required to produce a specific biological effect as a function of wavelength. The most significant adverse health effects of exposure to UV light have been reported at wavelengths below 315 nm.

Effects on the skin

A large proportion of UV light incident on the skin is absorbed in the epidermis, although penetration increases for longer wavelength UV-A.

The effects on the skin can be acute, which appear rapidly and are generally of short duration, or chronic, which are long-lasting, cumulative and may not appear for years.

Different skin phototypes and corresponding susceptibility to UV light exposure are summarised in the table below. Generally, people with skin phototypes 1 and 2 are the most susceptible to both acute and chronic effects.

Acute adverse effects on the skin

This is a photochemical response of the skin, normally resulting from overexposure to UV light below 315 nm, i.e. UV-B and UV-C. Exposure to UV-A alone can produce erythema, but only at very high radiant exposures (>10 J/cm2).

Erythema appears within a few hours of overexposure and the maximum effect occurs within 8-24 hours. The severity will depend on UV light wavelengths, UV light irradiance values, duration of UV light exposure and skin type of the individual concerned. This may be followed by an increase in skin pigmentation (delayed tanning). Exposure to UV-A light can cause an immediate but temporary change in skin pigmentation known as immediate pigment darkening.

A mild form of erythema – skin reddening, as a result of increased blood content of the skin by dilation of the superficial blood vessels. Also the possibility of an itchy or bumpy rash. Gradually fades over a few days.

A severe form of erythema – painful inflammation, burns and blistering of the skin. Gradually subsides over a period of 3-4 days with subsequent dryness and peeling of the skin.

The relative effectiveness of different UV light wavelengths for causing erythema is illustrated below, which shows the erythema action spectrum for skin phototype 2 after a single UV light exposure, acc. to Parrish et al(31). It can be seen that a peak exists at 297 nm in the UV-B region, indicating that UV light at this wavelength is the most effective in producing erythema. Therefore by definition, this is given the value 1. The effectiveness at other wavelengths is then related to this value. For example, the effectiveness at 330 nm is only 1/1,000 of that at 297 nm. 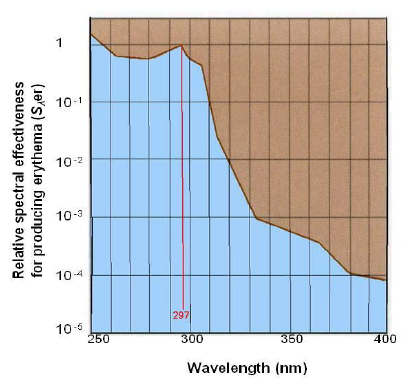 Some rare individuals have abnormal skin responses to UV light exposure because of genetic, metabolic or other abnormalities.

In addition, some people will develop heightened photosensitivity caused by their intake or contact with certain drugs or chemicals. Unfortunately, there is no easy means of identifying those who will react in this way. A large number of chemical compounds are known to be capable of producing temporarily heightened photosensitivity, but the reaction seems most common with certain antibiotics and tranquillisers.

The speed and severity of the reaction largely depend on how the chemical reaches the cells of the skin. Some chemical compounds when in direct contact with the skin, can enhance photosensitivity within hours. However, those introduced by mouth or by injection will not increase photosensitivity until effective concentrations of the chemical have built up within the skin, which may take several days or even weeks.

UV-A light is most effective in producing photochemical reactions which occur due to photosensitive materials present in the blood. This is because UV-A light penetrates deeper into the skin than UV-B or UV-C, reaching regions of the skin where blood vessels are present.

Individuals with heightened photosensitivity may not be adequately protected against erythema and other reactions of the skin from exposure to UV light at or below the exposure limit value.

Chronic adverse effects on the skin

These are cumulative effects which can be attributed to repeated exposure to UV light and may not appear for years. Generally for indoor workers, the risk of developing chronic adverse effects will be influenced more strongly by childhood, social and recreational exposure to the sun.

These effects are considered to be mainly due to exposure to UV light wavelengths below 315 nm. i.e. UV-B and UV-C.

The most serious long-term effect of UV light exposure is the induction of skin cancer.

The non-melanoma skin cancers (NMSCs) are basal cell carcinomas and squamous cell carcinomas. They are relatively common in white people, although they are rarely fatal. They occur most frequently on sun-exposed areas of the body such as the face and hands and show an increasing incidence with increasing age. The findings from epidemiological studies indicate that the risk of both of these skin cancers can be related to cumulative UV light exposure, although the evidence is stronger for squamous cell carcinomas.

Malignant melanoma is the main cause of skin cancer deaths, although its incidence is less than NMSCs. A higher incidence is found in people with large numbers of naevi (moles), those with fair skin, red or blond hair, those with a tendency to freckle and those who sunburn but don’t tan on sun exposure. Both acute burning episodes of UV light exposure and chronic occupational and recreational exposure may contribute to the risk of malignant melanoma.

It must also be appreciated there are other possible contributory factors, which include: chemical carcinogens, viruses, immune deficiencies, scar tissue, ulcerations, vaccinations and non-healing wounds.

This is photo ageing of the skin which is characterised by a leathery wrinkled appearance and loss of elasticity. The most effective wavelengths for producing this effect are UV-A, because they penetrate to the collagen and elastin fibres of the dermis.

There is some evidence which suggests that UV light exposure can affect immune responses.

Effects on the eye

The effects on the eye can be acute, which appear rapidly and are generally of short duration or chronic, which are long-lasting, cumulative and may not appear for years. Acute effects are photokeratitis and photo conjunctivitis. Chronic effects are cataracts.

Light entering the eye passes through the cornea, aqueous, then through a variable aperture (pupil) and finally through the lens and vitreous to be focused on the retina. The optic nerve carries signals from the photoreceptors of the retina to the brain.

The eye is recessed within its orbit and shielded by the brow ridge, eyebrows and eyelashes. Bright light activates the constriction of the pupil and the squinting reflex to minimise the penetration of sunlight into the eye. However, the effectiveness of these natural defences in protecting against the adverse effects of UV light are limited when exposed to artificial UV light sources which emit no bright visible light.

Acute adverse effects on the eye

Also known as ‘arc eye’, ‘welders flash’, or ‘snow-blindness’. Normally results from overexposure to UV-B and UV-C light which is strongly absorbed by the cornea and conjunctiva. Exposure to UV-A alone can produce corneal injury, but only at very high radiant exposure (> 10 J/cm2). This is 10 times the UV-A exposure limit value for the eyes.

The severity will depend on UV light wavelengths, UV light irradiance values and duration of UV light exposure. These inflammatory reactions are comparable to sunburn of the very sensitive skin-like tissues of the eyeball and eyelids.

Major signs and symptoms – relate to corneal injury (photokeratitis) rather than injury to the conjunctiva (photo conjunctivitis). These are extremely painful and include a sensation of grit in the eyes, varying degrees of aversion to light, watering of the eyes and spasm of the eyelid muscles. Generally, appear within 6-12 hours following overexposure to UV light and subside after 24 to 36 hours, rarely resulting in long term damage to the eyes or vision.

Some people will develop heightened photosensitivity caused by their intake of certain chemical compounds, which then deposit in the lens or retina and render the tissues more vulnerable to UV light damage. These individuals may not be adequately protected from exposure to UV light at or below the exposure limit value. A large number of chemical compounds are known to be capable of producing temporarily heightened photosensitivity.

UV light can damage the retina (the light-sensitive surface at the back of the eye), but it does not usually reach the retina in significant amounts, since UV-B and UV-C is mainly absorbed by the cornea and UV-A by the lens. However, some people, known as pseudophakic, have lenses removed for medical reasons, (e.g. cataract formation) and will receive artificial intraocular plastic lenses.

Artificial lenses should be designed to absorb UV light, however, if this is not the case, these people may not be adequately protected against retinal injury from exposure to UV light at or below the exposure limit value.

There may be some very rare cases, where no artificial lens implant is placed in the eye after cataract removal, and these people (known as aphakic) may also not be adequately protected against retinal injury from exposure to UV light at or below the exposure limit value.

Chronic adverse effects on the eye

This is a cumulative effect which can be attributed to UV light exposure and may not appear for years. It is caused by absorption of UV-A and UV-B light in the lens of the eye. This can adversely affect proteins, which unravel, tangle and accumulate pigments, producing progressive yellowing in time that clouds the lens. The resulting loss of transparency may impair vision and if dense enough cause blindness. Generally for indoor workers, this long term risk will be influenced more strongly by social and recreational exposure to the sun.

It must also be appreciated there are other possible contributory factors which include: smoking, diabetes, steroids and episodes of severe dehydration.

Call 0121 423 2000 or complete the form below to discuss your UV light equipment or health and safety requirements.